Nigel Stanford: The One Man Band 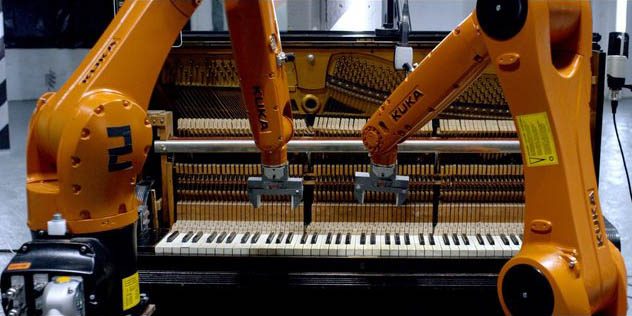 Robotics is currently one of the most disruptive technologies in today’s society ranging from sophisticated robotic arms for manufacturing all the way down to consumer electronics like robot vacuums, but what if we took a sophisticated robotic arm and made it do something human, for example, play music. Well that’s exactly what Nigel Stanford did in his new hit song Autimatica, which is a blend between robotics and music.

You might not have heard of Nigel Stanford, but you most likely heard his viral hit sensation Cymatics, which has over 15 million views and shows the artist manipulating water, fire, and lightning with sound to bring you a visual and auditory spectacle that mimics what people with Synesthesia see and hear; brain disorder where people can see audio and hear light.

In the video, you can see Stanford assembling his robot band by programming his KUKA robots via robot animator software. KUKA robots have an accuracy of 0.03mm, which translates to 30 microns. That allows them to strum the bass, scratch turntables, play piano, rock the drums, and lastly breeze through the synthesizer.  All is going well, until the robots get fed up with being told what to do and decide to turn it up a notch.

“I wanted to explore the concepts of robotics, the singularity, Artificial Intelligence etc.” “I also just thought it would be cool to see a robot explode a piano.”

Stanford’s “Autimatica” is the first single off of his new album of the same name. He believes that in the future AI and robotics will be able to compose music, but that shouldn’t worry musicians because there’s already a sea of music out there and that music generated by AI won’t have the advantage to receive an audience like its human counterpart.

“AUTOMATICA: The explosive intersection of robots and music. There is a magic that happens when scientific principles and high technology are applied to the creation of music.” – KUKA Robotics

One thing is for sure, that automation brings innovation and Nigel Stanford’s one-man band is proof enough that humans aren’t obsolete.

“For me this was a labor of love, exploring how technology is changing everything in our lives, affecting how humans interact with each other and what creativity means as more and more processes become automated.” – Migel Stanford