Tesla Motors Had Released A Preview Of Its Mechanized Charging Station 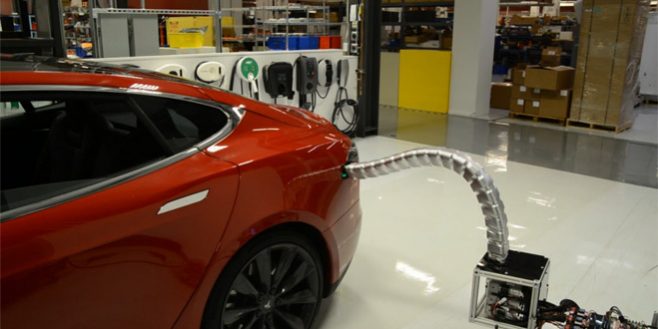 Automation is a result of when people invent progressive technologies that make life a little easier. Computers revolutionized the world, allowing people to send messages and important data to one another in a click of a button; cars reduced the amount of time it took to travel great distances. These inventions are than tinkered with by people that lead the way of innovation, for example, the smart phone, a personal device that not only can receive calls and SMS, but also has incredible computational capabilities and has been faceted with a myriad of helpful and entertaining applications, features, and functions.

Recently, it has come to SolveLight Robotics attention that Tesla Motors had released a preview of its mechanized charging station in hopes of facilitating in the near by future, the addition of these autonomous electric charging stations. With electric cars gaining popularity, due to its benefits on the environment and fuel economy, it’s apparent to why Tesla Motorswishes to incorporate these metallic snake like mechanized charging stations. In the video it shows a metal snake like charger slowly making its way to the charging port; it was like watching a science fiction move coming to reality.

It’s not a matter of if, but rather a matter of when Tesla’s charging technology will be ever more quicker in charging their electric cars. The faster the technology is developed the faster will consumers lean away from inefficient gas guzzling cars to the more eco friendly and fuel efficient electric car. It’s also, no surprise the company leans towards automation with its recent announcements of its Tesla Model S summer update that will give the car autonomous driving capabilities.

The future of automation is looking bright and brings much promise. Of course, with regulation needing to be implemented as a safety guideline, rather than a restriction, SolveLight Robotics is ecstatic about the release of this innovative and autonomous technology that will help shape the future of driving and not to mention improve safety conditions on the roads today.