Will Robots Make Our Lives Better Or Worse? 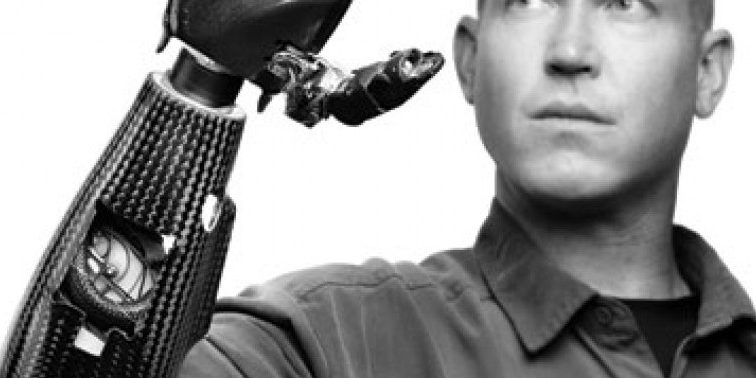 In 1993 the first commercially available microprocessor controlled prosthetic knee was released by Chas. A. Blatchford and Son, Ltd, of Great Britain it revolutionized how amputees walked and gave the market a precedent for a more aesthetically pleasing prosthesis. Shortly after Blatchford released another prosthesis in 1995 which was an upgraded version and was called the Intelligent Prosthesis. three years after Blatchford released their intelligent prosthesis they released a prosthesis which harnessed the power of hydraulic controls, pneumatic controls, and a microprocessor to provide the amputee with a walk that responded quicker to change in walking speed.

A robotic prosthetic limb works with the help of several components that are integrated into the body, which are: biosensors, which are used for detection of signals from the users nervous or muscular systems. The sensor then sends this information to a controller located inside the device, and interprets the information from the actuator and limb and sends it to the controller. There are several different types of biosensors an example includes surface electrodes that detect electrical activity on the skin, solid-state electrode arrays with nerves growing through them, or needle electrodes implanted in muscle. The robotic prosthesis monitors outside stimuli by the mechanical sensors and relays to the bio sensor or controller such as accelerometers and force meters.

When it comes to controlling the robotic prosthesis there are several steps to this process, it starts with the user’s nerve and muscular system getting connected to the controller and the actual device itself. The controller sends intention commands to the actuators of the device, while it interprets feedback from the sensor’s to the user. The controller is also in charge of monitoring and controlling the movements of the device itself, too. The actuators in the robotic prosthesis work to mimic the actions of muscle in producing force and movement.

There is a myriad of ways to connect the robotic prosthesis to the user, utilizing several different techniques depending on the user’s circumstance, but none the less giving almost the same result. One technique is called targeted muscle reinnervation (TMR) where the use of a users motor nerves, which had controlled muscle on an amputated limb, are then surgically redirected so that the surgeon reinnervate a small region of a large, intact muscle, example the pectoralis major. After the patient is hooked up to their robotic prosthesis they can think of moving a pinky of their missing hand, a small area of muscle on his chest will contract instead. The contractions of muscle that have been reinervated have a sensor over them allowing the prosthesis’s movements to be controlled by the user.

A recent variation of this technique emerged and it’s called targeted sensory reinnveration (TSR). This procedure although similar to TMR, is implemented by surgically rerouting sensory nerves to the skin on the chest, unlike TMR where the user’s motor nerves are rerouted to muscles. The patient then feels any sensory stimulus on that area of the chest, such as temperature or pressure, giving the user the feeling on an area of the amputated limb which the nerve was originally innervated.  Future robotic prosthesis might have sensory technology implemented on the tips of the prosthesis fingers relaying electrical signals to an actuator, which produces a similar stimulus on the “rewired” area of chest skin. The user would feel the stimuli occurring on the artificial limb as if it were their own.

Another technique that recently emerged that was developed by DARPA (Defense Advanced Research Project Agency) is the implementation of brainwave signals that are created by the user’s brain and then translates those signals into motion in the artificial limb. DARPA’s main goal is to create artificial limbs that tie directly into the user’s nervous system.

There are many different types of prosthetics starting with upper extremity prosthesis and are used in different levels of amputation: forequarter, shoulder disarticulation, transhumeral prostheisis, transradial 8prosthesis, wrist disarticulation, full hand, partial hand, finer, partial finger. With the transradial prosthesis an artificial limb that replaces an arm missing bellow the elbow. There are two main types of prosthetics that are available, one being cable operated limbs that work by attaching a harness and cable around the opposite shoulder of the damaged arm, the other form of prosthesis is myoelectric arms. Myoelectric arms work by sensing, electrodes from when the muscle in the upper arm move, this causes an artificial hand to open and close. The prosthetic industry names a trans-radial prosthetic arm as “BE” or below elbow prosthesis.

Lower exremeity prosthesis can aid in replacing different levels of amputations. These include hp disartiulation, transfemoral prosthesis, knee disarticulation, transtibial prosthesis, syme’s amputation, foot, partial foot, and toe.  Lower extremity prosthesis has two main subcategories one being trans-tibial (any amputation transecting the tibia or a congenital anomaly resulting in a tibial deficiency) and trans-femoral (any amputation transecting the femur bone or a congenital anomaly resulting in a femoral deficiency).

Prosthesis’s that replace a leg missing above the knee is called transfemoral prosthesis. Transfemoral amputees can have a very difficult time regaining normal movement. Transfemoral amputees exert 80% more energy to walk than a person with two whole legs, due to the assistances the knee provides in walking. Newer prosthetic designs incorporate hydraulics, carbon fiber, mechanical linkages, motors, computer microprocessors, and other innovative combinations of these technologies being implemented to give the user more control. The prosthetic industry names a trans-femoral prosthetic leg an “AK” or above knee prosthesis.

Prosthesis that replaces limbs below the knee is called transtribial prosthesis. Transtibial amputees are usually able to regain normal movement more readily than someone with a transfemoral amputation, due to the knee still being there, gives the person easier movement. The prosthetic industry names a trans-tibial prosthetic leg am “BK” or below the knee prosthesis.

Several individual companies have attempted to reduce the cost of prosthesis through different methods. For people who are looking for a more economical way of getting a prosthetic there is currently an open design prosthetic forum known as “Open prosthetics Project” and another open-source forum called “PATCH Project”. Both aid in the help of advancing prosthetics domestically and foreign because transradial and trantibial can cost between $6,000 and $8,000. Transfemoral and transhumeral prosthetics cost approximately twice as much and can sometimes cost up to $35,000, not to mention replacements from wear and tear, fitting issues, and growth. The Open Hand Project aims to utilize 3D printing so that the cost of a robot prosthetic can go from $10,000 to $1,000 and can you visit their website at this link for more information:  http://www.openhandproject.org/

As time progresses and technologies develop, people that have amputation will one day, not have to worry about high costs and limited mobility but, rather when the next time they can run in the sun and enjoy their day without having to be limited by a prosthetic.