Coexistence: Our Opinion On Robots Taking Over Human Jobs 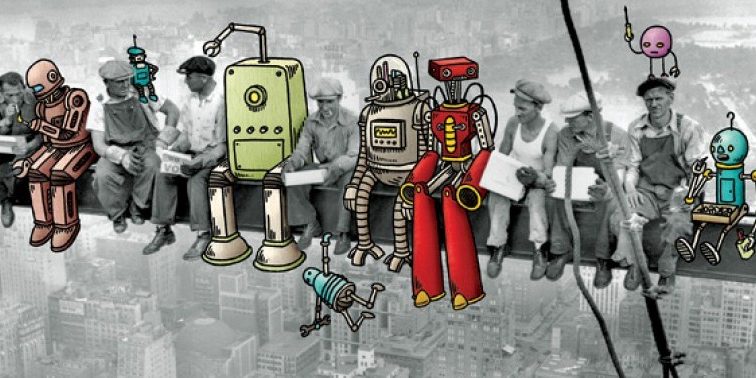 The field of robotics is expanding at an all time high. Yesterday’s innovation is today’s outdated version, bringing arise a better and faster robot with a short passage of time. Robots taking over jobs are improving the labor force drastically reducing production costs resulting in a much more efficient production process and work force that any generation has seen before. In this blog, we will be discussing the future of job growth and the impact that automation and robotics has on the future of the work force.

For a long time many analysts have spoken about the 80-20 rule, where 20 percent of the population owns 80 percent of the wealth. With the rise of technology the gap may be coming to a close the replacement of the human element with the mechanical element will trim away at the unskilled and even skilled workers, due to advancements in software computing, don’t believe it? Recently a computer was able to solve a mystery that has been plaguing biologist for countless years; through a process of reverse engineering and DNA sequencing software, a computer was able to analyze and answer the age old question on how planarian worms (A.K.A. flatworms) regenerate broken segments of itself, great news for regenerative sciences and the future of “Deep learning” technologies.

Innovation in the past was pioneered by the few and rewarded even fewer in a major way, but today’s world is changing from the proliferation of such technologies as 3d printing and the many different variations of this technology and materials it can print from. Traditional prototyping methods were expensive and lacked room for variation, now the game is different 3d printers are taking over rapid prototyping and what’s even more interesting then that is that technology evolves at a faster pace then it ever has before, soon enough 3d printers will either be obsolete or fitted for 4d printing materials to give not only form to your prototype but function within the material itself. Inventors and innovators alike are shrinking their initial investments and profiting at a higher rate; the downfall being, the time for people to innovate on your design has also shortened the gap, making it much more difficult to have consistency in your business.

Now even though the future doesn’t look bright for many because skill sets today will be changing every few years, it will force people to adapt to their economy at an increasingly fast pace same way how natural selection work’s. But in order to find new jobs and ways for these tools to be utilized and innovate their application there needs to be “permissionless innovation” says Robert Pepper, Vice president, Global Technology Policy, at cisco systems. The Internet is a prime example of why unadulterated innovation will allow any industry to blossom and pioneer the new frontier of industry.

People have a hard time letting go of the past and embracing the future, but there comes a time when you are faced with this decision, especially in business. Robotics in the workplace will give people new opportunities to create new jobs that are a crucial component of everyday life. There will always be individuals who will try to stay ahead of the curve and not only embrace our technological break through, but also employ it in their daily activity and business function, after all robots and computers have better stamina and computational powers then we humans possess.

P.S. How do you feel about this topic? Leave your comment bellow.
Illustration by Andrew Rae; Photograph: Bettmann/Corbis