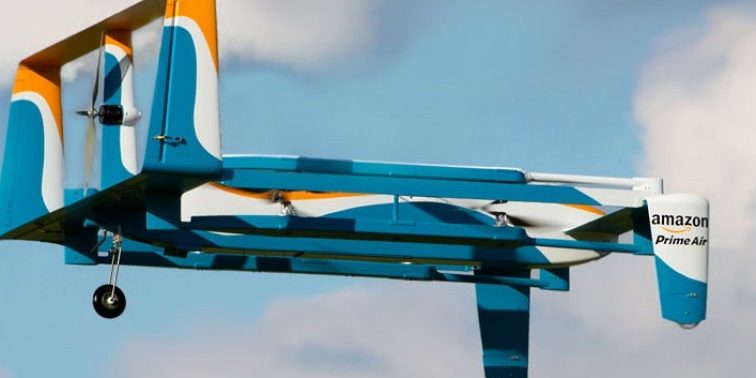 As time goes by, so do delivery methods. In the beginning the domestication of horses allowed for long distance delivery, which is relatively faster then on foot. Soon after, horses were replaced with trains and automobiles. Fast-forward to today we have several alternative delivery methods such as planes, trains, cars, and ships.  The newest method will be the flagship of delivery in the 21st century, drones.

For years Amazon has been playing with the idea of a drone delivery service, but due to the Federal Aviation Association (F.A.A.) refusal to grant them permission to test drone deliveries to the public the company is looking to test abroad. Amazon recently released a video of their Amazon PrimeAir service that was narrated by Jeremy Clarkson, known as the former host of Top Gear, to show how the technology would work and speed delivery times down to 30 minutes or less! Allowing consumers to purchase and receive their items much quicker then traditional methods allow. The video is a ploy to influence society to convince local politicians and the F.A.A. to grant permission to Amazon to launch its drone service publicly.

Companies such as DHL have already started testing its parcelcopter in Germany to show the convenience and efficiency of drone delivery, delivering medicines to the island of Juist. Amazon will move its drone operations to Europe if they are not granted permission in the US. That’s bad news for the American consumer looking to get speedy delivery.

Its interesting to see what other drones Amazon has created in order to accommodate its deliveries. Creating an efficient method of delivery will inevitably leave society wondering how it ever lived without a drone delivery service. One thing is for sure the innovation of delivery is coming, removing the old and replacing it with the new. Let SolveLight Robotics know what you think about Amazon using drones by voicing your opinion on our blog or Facebook. Thanks for reading!