Introducing RQ-Huno, A Great Robot For Hobbyist And Students 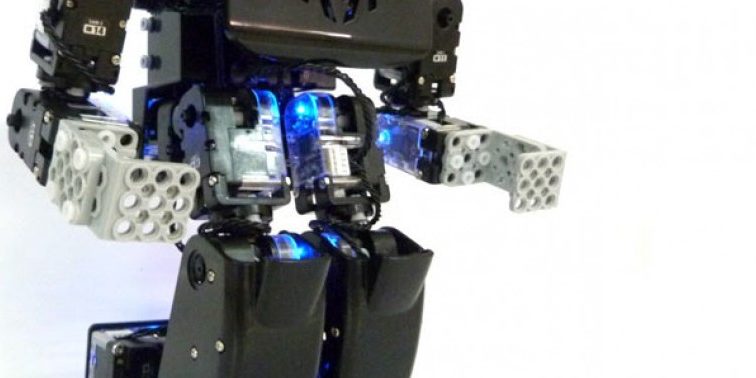 SolveLight Robotics is delighted to present the RoboBuilder RQ-Huno Humanoid Robot Kit for kids. The RQ-Huno is a great kit for educating kids because of the many different builds that can be constructed from the kit. Educators are always looking to find how to make robots for kids’ fun and RQ-Huno’s sophisticated and versatile design is the robot for the job.

RQ-Huno is rich in features, great design, visual software, and multiple other programming language options is perfect for students and hobbyist alike, allowing programming and controlling their robot with ease. Set up, program and play in competitions with the RQ-Huno humanoid robot to verse other small humanoid robotic platforms in RoboCup and other robotic competitions. Another great feature the RQ-Huno has is its unique joint assembly system and daisy chain serial bus makes assembling and diagnosing the robot, quick and easy. The robot assembly only requires a combination of joints, rivets, frames, joint frames and screws.

What makes the light weight RQ-Huno quick and agile is the exclusive SAM-3 robot actuators that offer an impressive torque of 3kgf/cm. RQ-Huno comes with the ARM Cortex M3 microcontroller and is capable of storing up to 21 motions (11 predefined and 10 user defined) and up to 10 autonomous behaviors.  The RQ-Huno comes with an infrared remote control for full control of your robot giving users a complete package. An additional add-on for the RQ-Huno, which is sold separately, is the Bluetooth module that can be attached to the robot and can be controlled via free app downloaded in the Play store for Android Devices.

The RQ-Huno is a great robot for hobbyist and students to build, learn, and play. By using imagination and logic, build different robots out of the RQ-Huno kit and learn to program with its visual programming software and other languages for advanced users. SolveLight Robotics wants our readers to voice their opinions, thoughts, and reviews of the RQ-Huno on our Facebook and Blog for a better overall experience, thanks for reading!