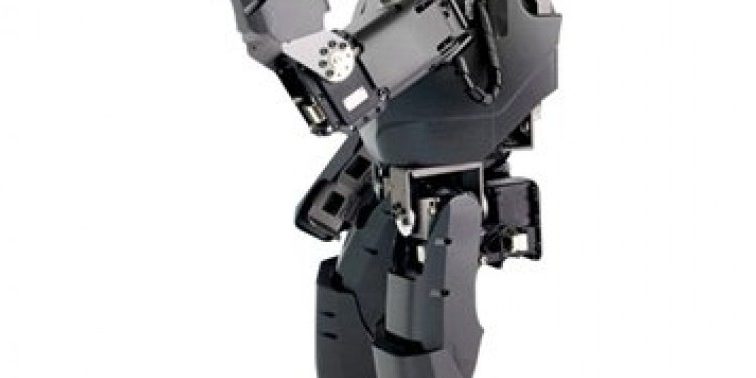 Humanoid robots are used as a research tool in several scientific areas. Researchers need to understand the human body structure and behavior (biomechanics) to build and study humanoid robots. On the other side, the attempt to the simulation of the human body leads to a better understanding of it. Human cognition is a field of study which is focused on how humans learn from sensory information in order to acquire perceptual and motor skills. This knowledge is used to develop computational models of human behavior and it has been improving over time. It has been suggested that very advanced robotics will facilitate the enhancement of ordinary humans, also known as transhumanism.
Although the initial aim of humanoid research was to build better orthosis and prosthesis for human beings, knowledge has been transferred between both disciplines. A few examples are: powered leg prosthesis for neuromuscularly impaired, ankle-foot orthosis, biological realistic leg prosthesis and forearm prosthesis.

Besides the research, humanoid robots are being developed to perform human tasks like personal assistance, where they should be able to assist the sick and elderly, and dirty or dangerous jobs. Regular jobs like being a receptionist or a worker of an automotive manufacturing line are also suitable for humanoids. In essence, since they can use tools and operate equipment and vehicles designed for the human form, humanoids could theoretically perform any task a human being can, so long as they have the proper software. However, the complexity of doing so is deceptively great.

They are becoming increasingly popular for providing entertainment too. For example, Ursula, a female robot, sings, play music, dances, and speaks to her audiences at Universal Studios. Several Disney attractions employ the use of animatrons, robots that look, move, and speak much like human beings, in some of their theme park shows. These animatrons look so realistic that it can be hard to decipher from a distance whether or not they are actually human. Although they have a realistic look, they have no cognition or physical autonomy. Humanoid robots, especially with artificial intelligence algorithms, could be useful for future dangerous and/or distant space exploration missions, without having the need to turn back around again and return to Earth once the mission is completed.

A sensor is a device that measures some attribute of the world, being one of the three primitives of robotics (besides planning and control), sensing plays an important role in robotic paradigms. Sensors can be classified according to the physical process with which they work or according to the type of measurement information that they give as output. In this case, the second approach was used. Proprioceptive sensors sense the position, the orientation and the speed of the humanoid’s body and joints. In human beings the otoliths and semi-circular canals (in the inner ear) are used to maintain balance and orientation, In addition humans use their own proprioceptive sensors (e.g. touch, muscle extension, limb position) to help with their orientation. Humanoid robots use accelerometers to measure the acceleration, from which velocity can be calculated by integration; tilt sensors to measure inclination; force sensors placed in robot’s hands and feet to measure contact force with environment; position sensors, that indicate the actual position of the robot (from which the velocity can be calculated by derivation) or even speed sensors. Arrays of tactels can be used to provide data on what has been touched. The Shadow Hand uses an array of 34 tactels arranged beneath its polyurethane skin on each finger tip. Tactile sensors also provide information about forces and torques transferred between the robot and other objects. Vision refers to processing data from any modality which uses the electromagnetic spectrum to produce an image. In humanoid robots it is used to recognize objects and determine their properties. Vision sensors work most similarly to the eyes of human beings. Most humanoid robots use CCD cameras as vision sensors. Sound sensors allow humanoid robots to hear speech and environmental sounds, and perform as the ears of the human being. Microphones are usually used for this task. Actuators are the motors responsible for motion in the robot. Humanoid robots are constructed in such a way that they mimic the human body, so they use actuators that perform like muscles and joints, though with a different structure. To achieve the same effect as human motion, humanoid robots use mainly rotary actuators. They can be either electric, pneumatic, hydraulic, piezoelectric or ultrasonic. Hydraulic and electric actuators have a very rigid behavior and can only be made to act in a compliant manner through the use of relatively complex feedback control strategies. While electric coreless motor actuators are better suited for high speed and low load applications, hydraulic ones operate well at low speed and high load applications. Piezoelectric actuators generate a small movement with a high force capability when voltage is applied. They can be used for ultra-precise positioning and for generating and handling high forces or pressures in static or dynamic situations. Ultrasonic actuators are designed to produce movements in a micrometer order at ultrasonic frequencies (over 20 kHz). They are useful for controlling vibration, positioning applications and quick switching. Pneumatic actuators operate on the basis of gas compressibility. As they are inflated, they expand along the axis, and as they deflate, they contract. If one end is fixed, the other will move in a linear trajectory. These actuators are intended for low speed and low/medium load applications. Between pneumatic actuators there are: cylinders, bellows, pneumatic engines, pneumatic stepper motors and pneumatic artificial muscles. In planning and control, the essential difference between humanoids and other kinds of robots (like industrial ones) is that the movement of the robot has to be human-like, using legged locomotion, especially biped gait. The ideal planning for humanoid movements during normal walking should result in minimum energy consumption, like it does in the human body. For this reason, studies on dynamics and control of these kinds of structures become more and more important. To maintain dynamic balance during the walk, a robot needs information about contact force and its current and desired motion. The solution to this problem relies on a major concept, the Zero Moment Point (ZMP).Another characteristic of humanoid robots is that they move, gather information (using sensors) on the “real world” and interact with it. They don’t stay still like factory manipulators and other robots that work in highly structured environments. To allow humanoids to move in complex environments, planning and control must focus on self-collision detection, path planning and obstacle avoidance. Humanoids don’t yet have some features of the human body. They include structures with variable flexibility, which provide safety (to the robot itself and to the people), and redundancy of movements, i.e. more degrees of freedom and therefore wide task availability. Although these characteristics are desirable to humanoid robots, they will bring more complexity and new problems to planning and control.

Robots may recognize people or objects, talk, provide companionship, monitor environmental quality, respond to alarms, pick up supplies and perform other useful tasks. General-purpose robots may perform a variety of functions simultaneously or they may take on different roles at different times of day. There are many jobs which humans would rather leave to robots. The job may be boring, such as domestic cleaning, or dangerous, such as exploring inside a volcano. Other jobs are physically inaccessible, such as exploring another planet, cleaning the inside of a long pipe, or performing laparoscopic surgery (also called minimally invasive surgery is a modern surgical technique in which operations are performed far from their location through small incisions usually .5-1.5cm elsewhere in the body). The population is aging in many countries, especially Japan, meaning that there are increasing numbers of elderly people to care for, but relatively fewer young people to care for them. Humans make the best carers, but where they are unavailable, robots are gradually being introduced.

ROBOTIS OP2 is a miniature-humanoid robot platform with advanced computational power, sophisticated sensors, high payload capacity, and dynamic motion ability developed and manufactured by Korean robot manufacturer ROBOTIS in collaboration with Virginia Tech, Purdue University, and University of Pennsylvania. OP2 has twenty degrees of freedom [20 DOF] each controlled by a DYNAMIXEL MX-28T[2] servo motor. The MX-28T has a stall torque of 24 kgf·cm (at 12 V, 1.5 A) and a 360 degree range of motion.

OP2‘s main purpose is for research and programmers in the fields of humanoid, artificial intelligence, gait algorithm, vision,[3] inverse kinematics, linguistics, etc. It is also supported by $1.2 million NSF grant and has been distributed to over 14 institutions already. OP2 is also the winner of the Kid Size League in the RoboCup 2011, 2012 League, and 2013 League(as a older version of OP2-DARwin-OP).