SolveLight Robotics is delighted to present the RQ-Huno Humanoid Robot Kit for kids. The RQ-Huno is a great kit for educating kids because of the many different builds that can be constructed from the kit. Educators are always looking to find how to make robots for kids’ fun and RQ-Huno’s sophisticated and versatile design is the robot for the job. RQ-Huno is rich in features, great design, visual software, and multiple other programming language options is perfect for students and hobbyist alike, allowing programming and controlling their robot with ease. Set up, program and play in competitions with the RQ-Huno humanoid robot to verse other small humanoid robotic platforms in RoboCup and other robotic competitions. Another great feature the RQ-Huno has is its unique joint assembly system and daisy chain serial bus makes assembling and diagnosing the robot, quick and easy. The robot assembly only requires a combination of joints, rivets, frames, joint frames and screws. 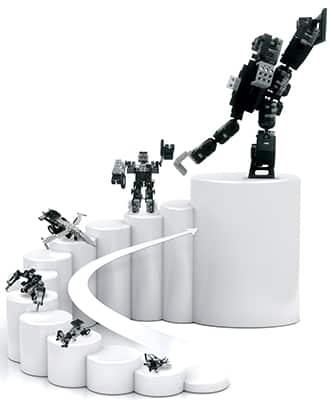